A History of FX Markets The foreign exchange (FX) market plays an important role throughout the world economy.

The FX market affects output and employment through exchange rates, inflation through the cost of imports and commodity prices, and international capital flows via the risks and returns of different assets.

In this article, we explore the history of the market to understand how it has become such a major focus for policymakers and the public across the world.

Also read our article on “What is Forex trading?”

What are FX markets?

As the largest global financial market with over $5 trillion in daily transactions, the FX market revolves around the trading of currency pairs against each other, for example, EUR/USD, USD/JPY and GBP/USD.

Currently, the FX market consists of over 4,600 International Banks and millions of speculators who participate worldwide and trade over $1.9 trillion in daily volume across dozens of different currencies.

The history of the Forex Market

Historically, the exchange of currencies date back to ancient times, when traders initially exchanged coins from different countries.

For example, 2500 years ago, the Greeks and Egyptians exchanged goods and currencies with molten silver and gold coins, with their value determined by their actual weights and size.

Nonetheless, the FX market underwent some dramatic transformations over time. Most notably, the Bretton Woods Agreement, which was instituted in 1944 to control currency fluctuations by tying currencies to the price of gold. This agreement remained intact until the early 1970s after which the gold standard wasdeserted by US President Richard Nixon in 1973 in favour of free-floating exchange rates.

Subsequently, the FX market quickly established itself as a key financial market.  Prior to 1998, the FX market was only available to larger entities trading currencies for commercial and investment purposes via banks.

Nowadays, online currency trading platforms and the internet act as a gateway for smaller financial institutions and retail investors to access a similar level of liquidity as major interbank players.

The biggest game changer for FX markets was the advent of electronic trading which transformed the market’s structure while also improving its quality, transparency and transaction costs. Particularly, this transformation proceeded in two stages.

For better context, electronic trading platforms replaced the telephone and transformed the interdealer market in the late 1980s while leaving the dealer-customer relationship largely intact. In practice, in 1987, Reuters built a system for bilateral trades between dealers called the Thomson Reuters Dealing.

Using the same principle, electronic systems aimed to merely replace telephone conversations with typed messages, in a speedier and more efficient manner for dealers to enhance operating efficiency with the generation of electronic trading records.

Subsequently, this quickly became the dependable tool for interdealer trading, enhancing transparency in the interdealer market.

With the arrival of these competing electronic brokers (EB), dealers could now trade anonymously and electronically.

In practice, a trader at one of the large banks would visualise the EBS screen but wouldn’t know the identity of the banks placing the limit orders, allowing parties to take on large positions without alerting their competitors.

Dealers also preferred these trading platforms in contrast to the voice brokers since they were faster and more operationally efficient.

By the end of the 1990s, the electronic brokers controlled most interdealer trading in liquid currencies and because of network externalities, liquidity naturally gravitated to just one platform for each currency.

As a result, EBS has since dominated interbank trading for the EUR, JPY, and CHF, while Reuters dominates the GBP, AUD, CAD, and Scandinavian currencies. That said, voice brokers still remain essential for less liquid currencies as they account for 10% of global spot FX trading.

Nonetheless, in 1997 a consortium of 74 banks decided to design a new electronic settlement system to address settlement risk. In 2002, “Continuous Linked Settlement” (CLS) Bank became operational to reduce Herstatt risk by settling both legs of every trade concurrently as well as net payments across member banks prior to transferring funds (multilateral netting).

By the mid-90s, bid-ask spreads on foreign exchange trades had narrowed in the interbank market. They remained unchanged for end customers, enabling dealers to reap enhanced profits.

As a result, electronic trading for end customers started around 1996 when State Street launched its proprietary electronic platform, FX Connect.

This groundbreaking system essentially replaced the telephone with an electronic connection, and hence had no effect on either transparency or bid-ask spreads in the FX markets. With its arrival, State Street and its customers could effectively handle trades more efficiently, with lower operational risk.

In 1999, a number of independent (non-bank) firms began to make a momentous shift into FX markets by launching new electronic trading platforms for FX that targeted end customers. These “multi-bank trading systems” (MBT) sought to allow customers to trade directly with a range of dealers over proprietary computer networks.

The first platform launched was Currenex in 1999. With Currenex, rather than calling individual banks in sequence to identify the best quote, customers could simply send a “request-for-quote” (RFQ) to many FX dealers concurrently. So, dealers were mandated to respond within a few seconds, and end customers would then trade with the dealer of their choice.

In 2000, State Street decided to make FX Connect available to end-users beyond its existing customer base, effectively transforming it into a multi-bank trading system. Consequently, other new entrants, like Hotspot FX (2000) and Lava (2001), also introduced electronic limit-order markets, enabling end-customers to trade anonymously.

Subsequently, in 2001, a consortium of major banks decided to respond to this competition from the new entrants by creating FXall, a multi-bank request-for-quote system. These banks went on to acquire some of the independent platforms – for example, Currenex, was later acquired by State Street in 2007, while Lava was bought by FXall.

How do modern FX markets operate?

In a true 24-hour FX market, forex trading starts each day in Sydney, then moves around the globe as the typical business day begins in each financial centre- first to Tokyo, London, then New York, operating across the continents in overlapping shifts. As a result, currencies are constantly traded 24 hours a day.

The FX market is considered an ‘Over-The-Counter’ or ‘interbank’ market, because of the fact that transactions are essentially conducted between two counterparts: over the telephone or via an electronic network.

Furthermore, trading isn’t centralised on an exchange, unlike stock and futures markets. Also, unlike other financial markets, FX investors can continuously respond to currency fluctuations triggered by economic, social and political events during the day or night since it is a 24-hour market.

Read our article on” Forex trading vs Stock trading.”

Who are the key players in FX markets?

The original FX market participants were essentially traders in goods and services.

The motives for currency exchange have expanded over the decades to include speculation, hedging, and arbitrage. Also, beyond importers and exporters, the major FX participants have now evolved to include asset managers, dealers, central banks, individual (retail) traders, and high-frequency traders.

How are existing FX markets regulated?

FX trading is essentially unregulated, in stark contrast to the extensive regulations imposed on most equity and bond markets. With varying levels of regulations in different countries, dealers tend to set up in jurisdictions with the most business-friendly regimes.

On a positive note, the FX market is sufficiently liquid that substantial manipulation by any single actor is more or less impossible during active trading hours for the major currencies.

Also, because FX markets are subject to minimal regulation, they are also subject to minimal reporting requirements, which could explain the scarcity of aggregate data on FX trading. This means that on any given day, no one really knows how much was traded in FX markets – neither regulators, monetary authorities, nor even the major FX dealers.

The only comprehensive information source is essentially the Triennial Central Bank Survey of Foreign Exchange Market Activity, which is a joint effort of central banks around the world coordinated every third year in April by the Bank for International Settlements (BIS).

The FX Market has grown by leaps and bounds since the early 1980s where all FX trading was done by phone, transparency was low, and customer transaction costs were high. Fortunately, this lack of transparency resulted in the introduction of electronic brokers in the early 1990s. Fast forward to today, single-bank platforms and multi-bank platforms now allow customers to trade electronically with their dealers and with each other.

As a result, market transparency has risen significantly while customer bid-ask spreads and trade processing costs have fallen due to straight-through processing.

In the coming years, we should expect to see more state-of-the-art internet-based trading platform advancements in the forex sphere with continued technological developments.

For more information on forex, reach us at Ortega Capital. 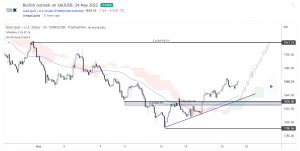 Prices are holding above a key support level on the monthly time frame, and we are seeing bullish order flow on the H2 time frame